As Memorial Day approaches, Dakar Foundation has recommitted to our journey and quest to bring the remaining 65 Red Tail Pilots remains home.  A  screening and Q&A event will be held inside of  the City Club LA, Friday May 27, 2022.  We’ll talk with family members of the Fallen 66, and interview one of the last remaining Distinguished Original Tuskegee Airmen (DOTA’s) and a contingency of representatives from the TAI National Organization and  Herein is our task force objective. 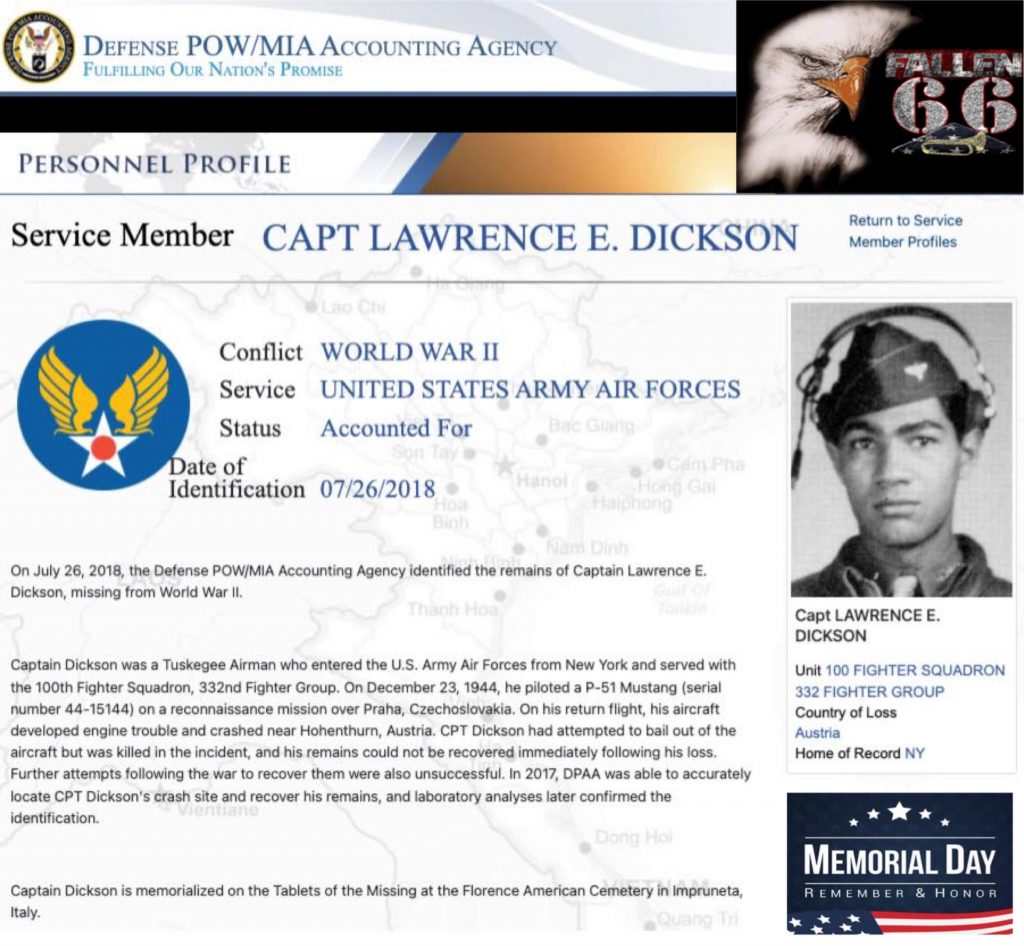 Some lasting memories and moments from the 47th Annual Tuskegee Airmen convention in Las Vegas was meeting Justin Hale who was a standout individual. Just 17 years of age, but cut from the cloth of born leaders, and sure to be someone to follow. Shout out to the @CivilAirPatrolpic.twitter.com/9v64BvFgMz— Kevin Clark (@Homageusa) August 14, 2018

So proud to represent @CityOfLasVegas to show our gratitude and pay our respects at the 47th Tuskegee Airmen National Convention @JWMarriott. Presented a proclamation to Brig. General (USAF Ret.) Leon Johnson. Thank you for your service. pic.twitter.com/KpnBITIpVu— Carolyn G. Goodman (@mayoroflasvegas) August 12, 2018

This is a great to hit the news cycle, but lest not forget there are 65 other Tuskegee Airmen KIA/MIA who have not returned. We’ll keep our eyes on the prize while others celebrate a wonderful milestone. https://t.co/loNrKjORzv— Kevin Clark (@Homageusa) August 2, 2018

Thanks DPAA for bringing one of our boys home. https://t.co/ldRboizF0Xpic.twitter.com/J9ki7UbvZq— Kevin Clark (@Homageusa) July 28, 2018

Help us find our brothers in Arms Remains of the 332nd Fighter Group. There were 66 pilots that were killed in action during World War II. We believe they deserve a burial with honors in Arlington. Find out how you can help? https://t.co/MtLNy48CDRpic.twitter.com/uMoac3fI57— Kevin Clark (@Homageusa) July 13, 2018 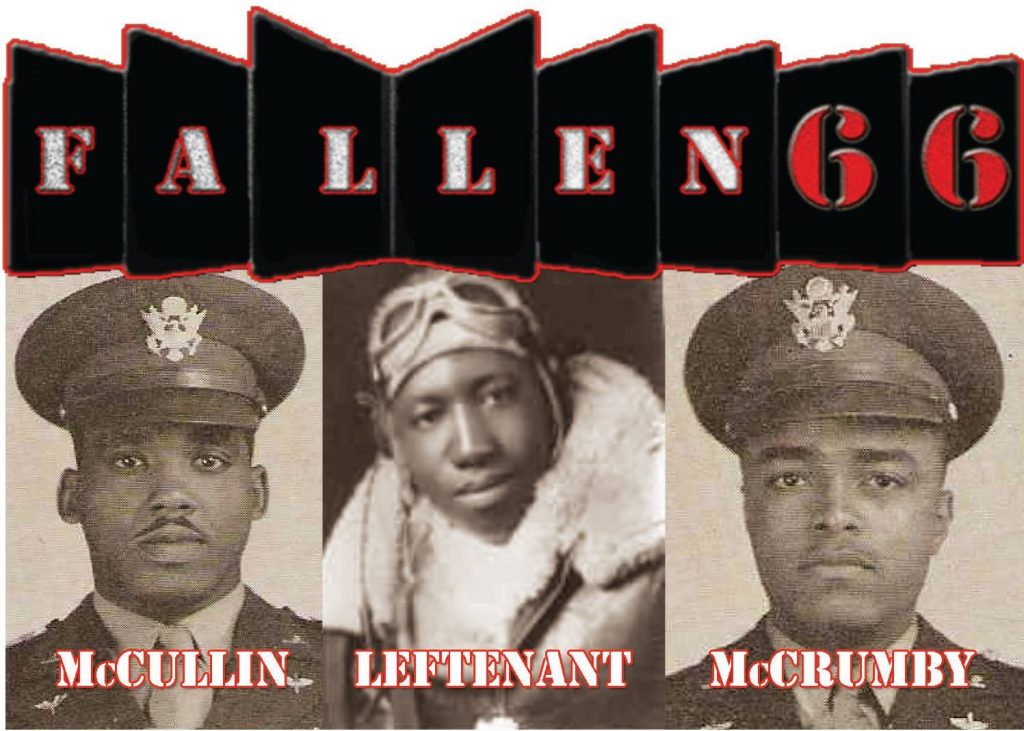 As we move closer to the Tuskegee Airmen Inc. Convention in Las Vegas, we want to enlist all supporters of the famed 332nd Fighter Group. We’er expecting 10 DOTA’s to add to our awareness documentary before the real work gets done overseas. pic.twitter.com/DZDT4yzHBI— Kevin Clark (@Homageusa) July 15, 2018

Our friend,Nancy Leftenant-Colon, who is 101 years old. We sat with Nancy to talk about the way-ahead for bring her brother Samuel back home.

The Unlocking Tuskegee Airmen X files  (UTAXF) is a STEAM showcase to enable students to Unlock the untold stories of the Fallen 66 and the Tuskegee Airmen at Large.  This project invokes the sacred role of all combatants “That No Man Left Behind”.

Lets get Samuels remains repatriated to Arlington Cemetery, Those governments in Europe are the keys to accelerating the process to get this done. The Fallen 66 awareness campaign kicks off @ the 2018 TAI Convention in Las Vegas https://t.co/3bJkXrOVo4https://t.co/v5xp4A7DSqpic.twitter.com/2k560hCZsJ— Kevin Clark (@Homageusa) July 15, 2018

The Fallen 66 made the ultimate sacrifice for this country and arguably are the cornerstones of the Tuskegee Airmen Experience 1941-49 – yet to-date, they are a mere numerical footnote. The goal of the consortium task force is to establish a comprehensive research tool and virtual memorial.

James McCullin, one of the @fallen661 has his family donate his footlocker and his purple heart medal to the museum. One of the only known collection of artifacts to repatriated to u.s. soil. https://t.co/OPdG7GC6vGhttps://t.co/JWMrzKbsj4— Kevin Clark (@Homageusa) July 15, 2018

This would allow an opportunity to make a case for enshrinement of the service records of the FALLEN 66, write their epitaphs, as well as create an addendum to historical information. There are photos, documents, data, and testimonials available on various media sites, however, with the exception of their names; the Fallen 66 ultimate contributions are not included on the permanent record of the Tuskegee Airmen Experience.

This day is for the those who gave all. We honor those Men and Women Killed In Action ; WW 1&2, Vietnam, Korea, Iraq & Afghanistan. Dakar continues to develop the story of the Tuskegee Airmen who have yet to be recognized. Video Roll Call The Fallen 66 https://t.co/z6oX3keyNPpic.twitter.com/T3IvkpZukU— Kevin Clark (@Homageusa) May 28, 2018

The Fallen 66 Task Force has started the process of building a sustainable legacy research tool for the FALLEN 66, and has been in talks with the National Park Service (to produce a phased social-research engine experience commencing Memorial Day 2019, which will eventually culminate into an annual commemorative celebration to be implemented, virtually, nationally and/or locally at regional national parks.

#MemorialDay
As the nation remembers our fallen heroes, special shout-out to two groups of African-American war heroes. The Tuskegee Airmen aka #RedTails and the original #BlackPanthers of the 761st Tank Battalion, the first African-American tank battalion to see combat in WWII.— MalaniKai (@MalaniKai) May 28, 2018

PHASE ONE features a web portal that houses a partially completed database of vetted facts from the U.S Air Force. This will also include a social media campaign-call-to-action to locate the missing pieces of the individual FALLEN 66 Profiles (photos, Obituaries, testimonials from surviving friends, family and peers.

PHASE TWO is to produce short-form media comprised of oral history from the remaining Documented Original Tuskegee Airmen (DOTA) who may have trained and flew with members of the FALLEN 66. This phase will also include interviews with key personnel comprised of Department Of Defense, NPS, and women of TAE. One example of short form media would be a 20-page military observance calendar highlighting TAE historical contributions.

PHASE THREE is to aggregate and publish an online matrix of all archived memorabilia such as: war letters, death certificates, photos, uniforms and medals of the FALLEN 66. These artifacts currently reside inside private governmental collections that have not been integrated into a single registry for public consumption particularly the contributions of the women of the TAE.

The Grandson Of one of the Fallen 66 was curious about Black History Role Models…He was extremely excited about seeing his last name in history books.. Needless to say this turned into an all day research project for him on his uncle @GeorgeMcCrumbypic.twitter.com/0Ed4qcxWAa— Kevin Clark (@Homageusa) July 12, 2018

PHASE FOUR is to create a speaker bureau and conduct workshops with panelists comprised of DOTA, NPS Interpretation specialists and influential TAE supporters. Our hopes are to encourage educational institutions, as well as DEOMI, and the Smithsonian to feature curatorial science programs. The FALLEN 66 series will provide exemplary preservation and conservation delivery practices. This is to increase student and attendee knowledge on how to encourage accession, catalogue techniques and next level digital archiving. In addition, the series will highlight film screenings featuring a Q & A, artifacts, and genealogy workshops.

We honor those who gave the ultimate sacrifice in defense of our nation. #MemorialDay#MemorialDay18#HonorThempic.twitter.com/PNPt2evv0V— Diversity (@ODMEO) May 28, 2018

With the implementation of a planning grant, the FALLEN 66 Task Force will deliver PHASE ONE for review. We will design a state-of-the-art experience- in a box for our partner’s shared vision.  The FALLEN 66’s place in American History will receive a faithful revision. Their families will finally be given a day or remembrance featuring obituaries, potential repatriation of their remains, and a virtual shrine to honor their service and sacrifice.

Fallen 66 member to be added ?

The Tuskegee Airmen were the first black military aviators in the U.S. Army Air Corps (AAC), a precursor of the U.S. Air Force. Trained at the Tuskegee Army Air Field in Alabama, they flew more than 15,000 individual sorties in Europe and North Africa during World War II. Their impressive performance earned them more than 150 Distinguished Flying Crosses, and helped encourage the eventual integration of the U.S. armed forces. #memorialdayweekend #memorialday #airforce #tuskeegeeairmen #redtails #veteran #veterans #brave #army #navy #marinesA post shared by Landus (@lansolo12) on May 28, 2018 at 6:56am PDT

UTAXF has identified (3) Fallen 66 families that have become charter members of the “Search And Rescue Mission”.  The Airmen that have been declassified and their X files have been opened for DNA certified families to start the process of repatriating their remains and burial in Arlingtion National Cemetery are:

@serracavaliers I’m George McCrumby, here I am and some of my classmates. pic.twitter.com/XEnsGn6t— fallen66 (@fallen661) September 28, 2012

Tuskegee Airman from Philly, lynched by the Nazis…read more 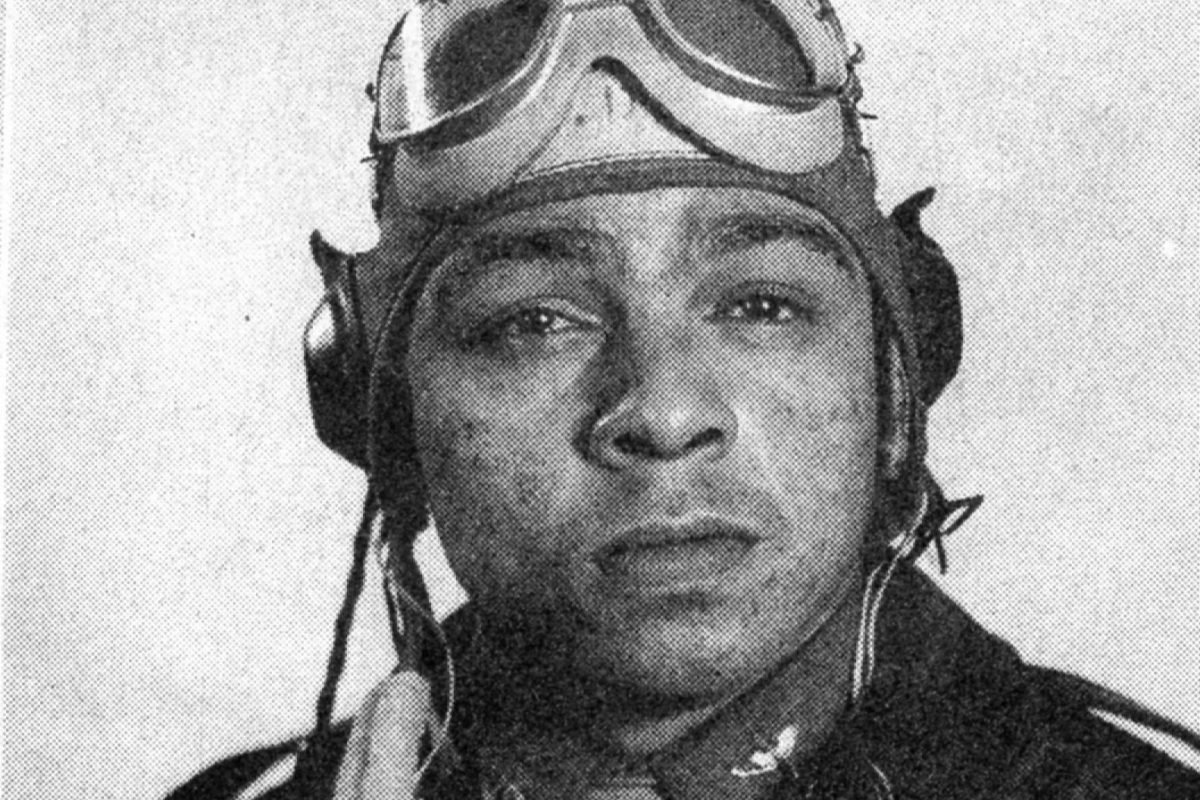 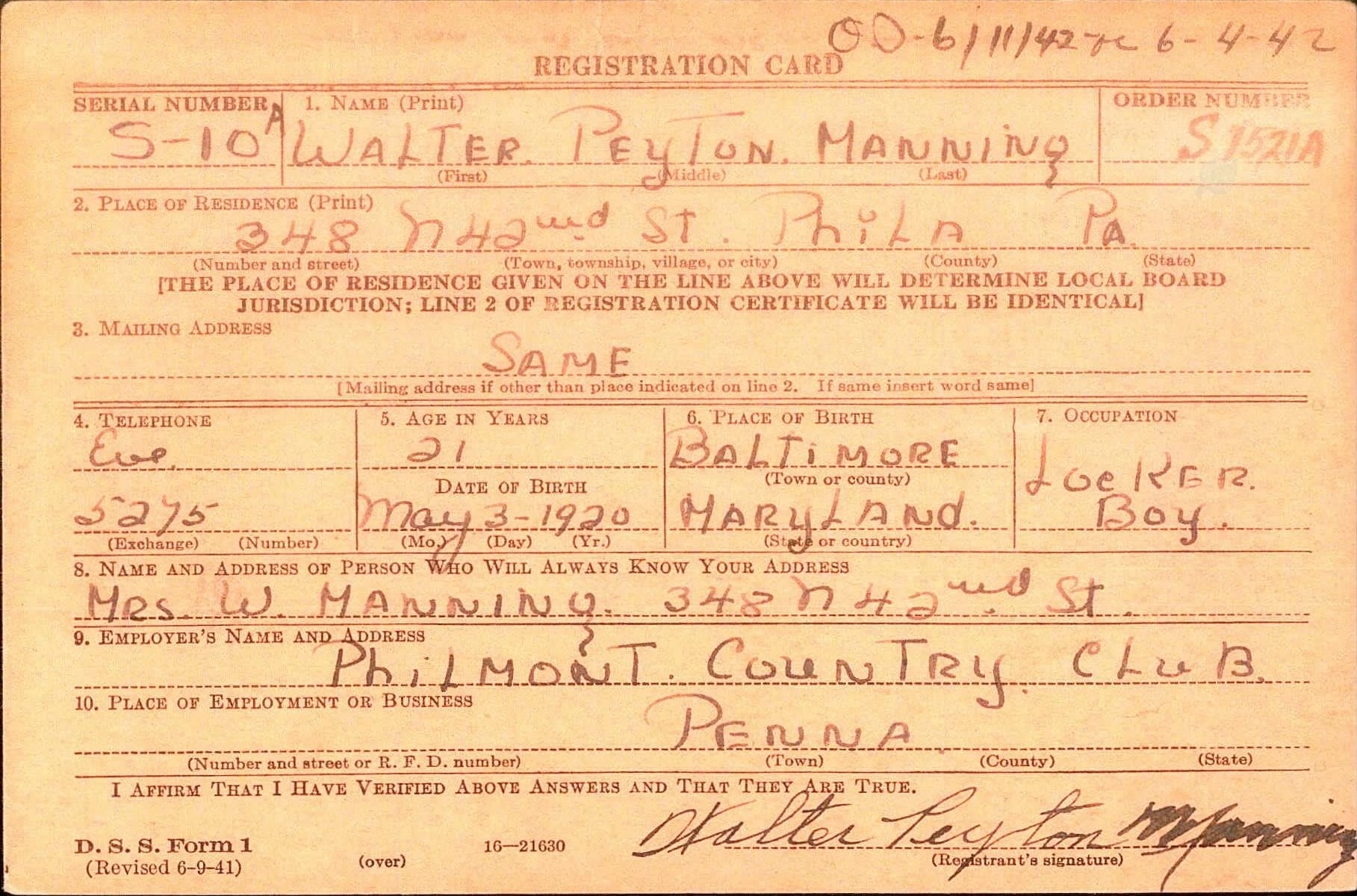 There are no words to describe the respect we have for these men. They are the epitome of #BlackExcellence. #TuskegeeAirmen #TakingTheStage
A post shared by The Top Tea (@thetoptea) on Jan 12, 2017 at 7:09pm PST