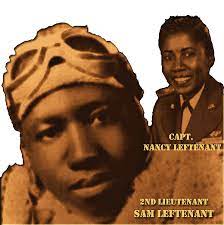 Years after the war ended, when Nancy Leftenant-Colon was an Air Force nurse in Germany, she would study the faces of black men she saw on the street, hoping that one might be that of her lost brother, Sam. A U.S. Army fighter pilot, and one of the famed African American Tuskegee Airmen, Samuel G. Leftenant , 21, went down in his P-51 on an escort mission over Austria in 1945. Neither he nor his plane were ever found. At first he was listed as missing in action.

Then, in 1946, he was declared dead. But his parents, James and Eunice, and his 12 siblings always hoped that someday he would turn up. Nancy thought maybe he had been knocked on the head and forgot who he was, and that one day she might spot him in a crowd.  All this was long ago. Her brother never came home, and was buried with honors, Jan. 4th, 2016. And Nancy is now 102

A memorial service was held at Arlington National Cemetery for Tuskegee Airman 2LT Samuel G. Leftenant, Jan.  14th, 2016, more than 75 years after went missing during an escort mission over Austria in 1945. (Ashleigh Joplin, Michael Ruane/The Washington Post) Nancy and her surviving sisters, Clara Leftenant-Jordan, 85, Mary E. Leftentant, 92, and Amy M. Leftenant, 887, gathered in Arlington National Cemetery to finally give Sam his goodbye. A touching flag ceremony was held a day later for the family.
As Air Force jet fighters streaked overhead in salute, the sisters assembled before an elegant horse-drawn caisson that arrived to the sound of a single muffled drum and the cadenced step of an Army casket team. The caisson carried a silver ceremonial coffin that was empty, except for an American flag.And the family sat not far from Sam’s memorial tombstone, beneath which there is no grave.
But a rifle party fired a salute, a bugler sounded taps, and 70 years after Samuel G. Leftenant, of Amityville, N.Y., vanished into the mountains near a place called Klagenfurt, his family could let him go.“We need to have closure,” Clara Leftenant-Jordan, of North Babylon, N.Y., said Wednesday. “I’m the youngest, and I’m 80 years old. We really would like to put an end to it, to say goodbye, because we haven’t.” “We always think that we will see him, that he will come back to us,” she said in an interview. “I have dreams that I might see my brother again. I realize that the likelihood of that isn’t going to come.” On April 12, 1945, four weeks before World War II ended in Europe, Lt. Leftenant and fellow P-51 pilot Lt. James L. Hall Jr., his flight leader, were escorting a formation of American bombers on a mission to Germany. They had left Ramitelli air base in Italy. Fellow Tuskegee pilot, and Leftenant’s buddy, George E. Hardy, 19, of Philadelphia, was flying another P-51 nearby . It was Leftenant’s third mission, his family said. He had been overseas less than three months. Shortly after 3 p.m., Hardy glanced off to his right and saw something sparkling near Leftenant’s fighter. Hall’s plane and Leftenant’s plane had collided, and “the prop chewed part of the other airplane, which caused all this aluminum” to fly off, Hardy said.