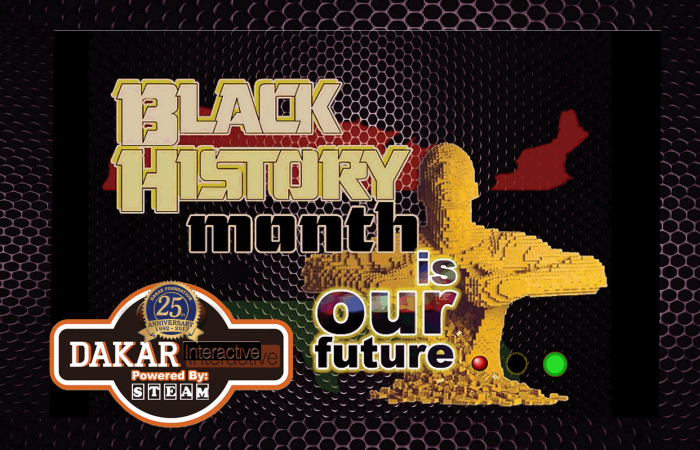 As we celebrate Black History Month and Jackie Robinson’s 100th birthday, we celebrate the life of all whose courage opened the gates for everybody, and in the process, made America better. pic.twitter.com/Fl9aDxqcGi

Dakar Foundation for the Performing Arts will feature a Black History Month Experience such as the one below.

In honor of Black History Month 2019, here are a few inspiring quotes from prominent black leaders and personalities:

This Black History Month Experience will serve as an announcement of the partnership between AT&T and Dakar Foundation to provide job skills training to support the development and design of a pipeline to introduce, prepare and place students in careers in a high-growth sector that is the signature industry of Los Angeles County.

Our theme this #BlackHistoryMonth is #BlackHistoryBuiltThis. From innovations to movements, from trends to language, & even down to the White House, the U.S. was built on our ancestors’ backs. Yet history books erase & whitewash them. We won’t accept that. https://t.co/1ntsS1egQp

We are inviting all of our key education, economic development and community stakeholders who can benefit and contribute to the success of this Black History Month Experience.  Our partnerships will support important and high-profile new and innovative initiatives such as the Strong Workforce Program and Guided Pathways by connecting local community college students to challenging work-based learning and job opportunities closely related to their field of study. Your participation and support is critical to ensuring your students benefit from the employer – supported efforts in your area

U Go Girl, Black History Maker In Process. Let No Weapon Formed Against U….. U were robbed once of Oscar consideration, but never again…. https://t.co/t6h5BgVhbRBusiness Owners – Here’s Everything You Need to Know to Onboard Like a Pro! https://t.co/l2Q0MtBZzn pic.twitter.com/MB2Xxa1MSy

Dakar wants to be a part of the resurgence of more activism in curating Black History, and this February marks our year-long effort to make Black History more relevant to all domestically and abroad. Everyone is racing to do that, and Dakar is working on emphasizing the history of civil rights, race relations and the history of slavery in a student-driven campaign to socialize and challenge them to know more about their past. One of our projects we’ll be sharing with the help of a select team of students from Los Angeles Community Colleges is, Victory By Valor, featuring the little known facts about iconic hall of fame athletes such as Arthur Ashe, Willie Mays, Joe Louis, Sugar Ray Robinson, and Jackie Robinson.

Multiple factors have made our efforts more compelling to millennials and generation Z to identify with facts and figures such as: as pop culture, film, television, and music. We hope our target student audience will become more energized in this seemingly polarizing racial times augmented by Donald Trumps administration in contrast to Barack Obama’s presidency, the 50th anniversaries of many civil-rights milestones, the Black Lives Matter movement, controversies over Confederate monuments, protests by NFL players and violent reaction in places such as Charlottesville, Virginia.

“The country is changing. It’s looking at itself in different ways than it has historically, and we believe pop up installations can engage a younger generation to lean-in on the timelines and perhaps contribute to them using trans-media to augment to  their own interpretation of this information to make meaning of their own experiences.”

Black Twitter, we’re counting on you to be loud and proud this February 2019. Lot’s of reflection on this past year, as well as the past 400 years. Lets go…. https://t.co/61WjqbfL6o

The story of Black History Month begins in 1915, half a century after the Thirteenth Amendment abolished slavery in the United States. That September, the Harvard-trained historian Carter G. Woodson and the prominent minister Jesse E. Moorland founded the Association for the Study of Negro Life and History (ASNLH), an organization dedicated to researching and promoting achievements by black Americans and other peoples of African descent.

Known today as the Association for the Study of African American Life and History (ASALH), the group sponsored a national Negro History week in 1926, choosing the second week of February to coincide with the birthdays of Abraham Lincoln and Frederick Douglass.

Like so many others, I stand on the shoulders of giants like Shirley Chisholm. Unbought and unbossed, she had the guts to speak truth — no matter how uncomfortable. She was an American icon. #BlackHistoryMonth pic.twitter.com/i6TH3YKIA0

Black History Month events  inspired schools and communities nationwide to organize local celebrations, establish history clubs and host performances and lectures.  In the decades the followed, mayors of cities across the country began issuing yearly proclamations recognizing Negro History Week. By the late 1960s, thanks in part to the Civil Rights Movement and a growing awareness of black identity, Negro History Week had evolved into Black History Month on many college campuses.

President Gerald R. Ford officially recognized Black History Month in 1976, calling upon the public to “seize the opportunity to honor the too-often neglected accomplishments of black Americans in every area of endeavor throughout our history.