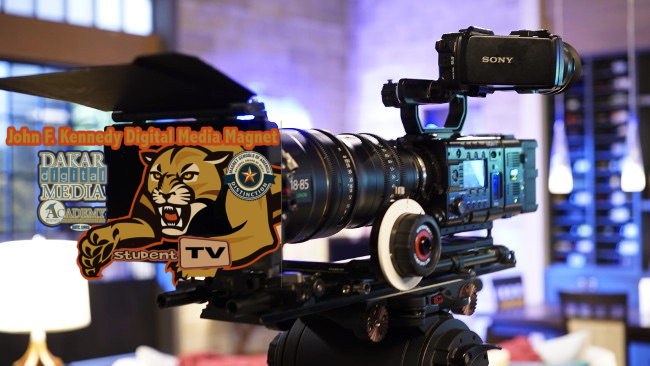 The JFK Cougars took over The Sony Digital Motion Picture Studio, Studio Soundstage7 in Culver City, Wednesday, May 3rd, and the experience will never be forgotten for all involved.

The 5-hour feild trip will culminate in a published sizzle reel assignment that may make the cut as a possible segment for a student-generated pilot on the new AT&T/DirecTV’s online channel.

Stephanie and crew plot out their assignment for the afternoon production.  Stephanie is one of the most compelling stories that we hope to share with mentors and career developers.

JFK Film students get a tutorial from Keith Vidger and staff as Aaron Lemos top students take advantage of Sony hardware and software.

After two years of work with the students from JFK Film magnet, Dakar is poised for a summer of bridge academy experience with students who want more exposure to industry insiders, STEM programming, and pre-apprenticeship preparation. The experience at Sony DMPC will result in a student project that will be post-produced and presented before the semester is over.