A federal judge ruled today that AT&T can complete an $85 billion purchase of Time-Warner. @Nawazistan reports that the potential mega-merger could have a profound impact on the media, entertainment and telecommunications landscape.

I believe AT&T will be victorious over the DOJ, but will it win in end?

I was preparing the Turkey, a day before Thanksgiving, when I got notifications and alerts on my phone regarding the proposed AT&T-Time Warner merger, and once I rinsed my hands off to unpack all of the reports, I was shocked with the news that the US Department of Justice (DOJ) filed a complaint to kill the  merger.

What follows is my mashup of the key DOJ complaint as filed. I also reflect on some recent cases.

Of particular interest is DOJ’s 2016 case against Time Warner and Charter merger based on similar complaints against AT&T merger.

What does the case analysis reveal about the likely outcome of the current case?

In its 8-K filing dated October 24, 2016, AT&T Inc. (T) disclosed that it had “entered into an Agreement and Plan of Merger, dated October 22, 2016” with Time Warner Inc. (TWX). That document laid out the proposed exchange rate of cash plus AT&T shares to be exchanged for Time Warner shares.

You can find the 8-K and other SEC filings at AT&T’s investor relations website.

Many readers may be familiar with the Trump Administration’s opposition to the proposed merger, including the then-candidate Donald Trump’s October 22, 2016, Gettysburg, PA, speech in which he said:

As an example of the power structure I’m fighting, AT&T is buying Time Warner and thus CNN, a deal we will not approve in my administration because it’s too much concentration of power in the hands of too few …”
Since then other pundits have weighed in on the possible outcome, including the media titan John Malone, who gave the deal a 75% chance of closing during a November 16, 2017, CNBC interview.

I am not a lawyer, but I do read a lot of financial legal documents as a former accountant and current technology banker. What follows is my quick review of the key Department of Justice (DOJ) complaint as filed. I also reflect on some recent cases and the political influences that might impact the case outcome. The goal is to be better informed about where things might be headed.

Review of the Case

Multichannel video programming distributors (MVPDs) include cable companies and broadcasters like Comcast and DirecTV who pay license fees to carry the programmers’ networks.” MVPDs generally bundle packages to sell to the customers. Recently, virtual MVPDs have emerged, and offer similar content but over the internet, bypassing many of the equipment with traditional MVPDs. That also allows virtual MVPDs not to require long-term contracts. Most consumers will be familiar with signing up for some 2-year contract service. “Subscription video on demand services (SVODs) like Netflix offer programming online, but generally do not provide live programming like sports or telecast.”

Jim Cramer: It drives me ‘crazy’ DOJ is looking at AT&T deal in a static way from CNBC.

As a quick aside, a horizontal merger is a merger among competitors in the same stage of the production process. A vertical merger is an aggregation along the value chain. For example, eBay’s (EBAY) acquisition of PayPal (PYPL) was a vertical merger since it was a marketplace platform acquiring a payment processor to enable easier transactions (Of course, PayPal subsequently was spun off.) An example of a horizontal merger is the merger between the Dow Chemical Company and Du Pont that created DowDuPont Inc. (DWDP). I’ll highlight the U.S. DOJ case against that merger as well.

First (paragraph 32 – 39): “The merger would give the merged company the power to lessen competition and harm consumers in the Multichannel Video Distribution and the All Video Distribution markets by increasing the prices its rival MVPDs and virtual MVPDs pay for Turner’s networks and impeding their use of HBO to attract customers.” (Emphasis mine.)

In the paragraphs that follow, DOJ uses some of the company’s own words against them. For example, DOJ cites DirecTV’s prior statement that “a standard bargaining model can be used to determine the likely increase in price that would result from vertical integration.” What this means is that when a distributor acquires a programmer, then the integrated entity may end up with too much pricing power.

DOJ asserts that with the emergence of SVODs like Netflix (NFLX) and Amazon Prime (AMZN), live programming was increasingly important to MVPDs like AT&T/DirecTV. For example, certain live sporting events are a “must-watch” and the company management has previously referenced such content allowing the company to drive rate increases.

Second (paragraph 40 – 41): “The merger would give the merged company the ability to impede and slow innovation by hindering emerging online competitors and would increase the likelihood of oligopolistic coordination.” (Emphasis mine.)

DOJ asserts that the merged entity would use increased market power to slow competition and innovation. In DOJ’s words (paragraph 41): “Moreover, after the merger, AT&T/DirecTV and Comcast/NBCU,3 which together have almost half of the country’s MVPD customers, would have an increased incentive and ability to harm competition by impeding emerging online competitors that they consider a threat, and increasing the prices for the networks they own.”

How AT&T and Time Warner’s words may haunt them in U.S. lawsuit https://t.co/qZxcWlbP9A pic.twitter.com/9PbvsL5YVL

First of all, I found DOJ’s anticompetitive assertions puzzling and a bit weak. To me, DOJ basically is arguing that old time cable companies (MVPDs) are struggling because they now have to rely on live programming and special programming to compete with Netflix and Amazon Prime (SVODs). Rather than explaining how this makes Netflix and Amazon Prime weaker, DOJ focuses on the competition between and among MVPDs. I believe AT&T will be able to argue all day in the court that the real threat isn’t MVPDs but the new gigantic internet companies like Amazon which deliver programming directly to its huge customer base.

DOJ could have weakened AT&T’s potential defense by showing how the combined entity could harm a Netflix subscriber, but then we know the answer to that. They can’t. I’m an AT&T wireless subscriber, and AT&T can buy all the channels it wants, but that’s not going to stop someone from subscribing to Netflix if they want the convenience of on-demand programming. DOJ’s essential logic that integrating distribution and programming gives the proposed merged entity too much power also doesn’t hold water. After all, the SVODs like Amazon Prime both produce the content and own the distribution network.

In fact, Amazon’s content business has an unfair advantage in that it doesn’t even have to spend money on customer acquisition. It already has customer names and preferences from years of books and products ordered on Amazon and Kindle. Further, unlike AT&T that has to build physical infrastructure and DirecTV that has to send a technician to come and install a dish, Amazon and Netflix simply can use existing internet networks to deliver content.

Heck, saying it out loud that way makes me feel sorry for AT&T/DirecTV. I feel like DOJ should give them Time Warner just so that old cable can survive alongside the new internet behemoths.

DOJ is fretting over a hypothetical threat that is far from reality. Said differently, DOJ is comparing apples to oranges to some extent. DOJ appears to be misunderstanding or underestimating the substitution effect between traditional cable and internet content.

Physical infrastructure heavy business model is under threat and needs the scale to retain its cash flows. And even then, the model may be severely squeezed in coming decades. By contrast, all Netflix and Amazon have to do is to do a little better on data analysis of its existing user base, all it has to do is to dream up some nifty feature and roll it out. For that matter, what’s to stop a 20-something from creating his or her own YouTube channel and gaining a huge audience following? And what does that do to traditional ad dollars at risk? (Hint: this has happened.) Sky is the limit.

The new internet players are better positioned in many ways to capture emerging technologies and imagination like virtual and augmented reality than AT&T is.

Such arguments are completely absent in DOJ’s case. Instead, DOJ’s case seems stuck on past business models and old school dealings over boardrooms and golf courses.

Again, reflecting on that, I really feel sorry for AT&T and anyway you cut it, the future sounds brighter for the SVODs. But, that’s not the point of this article.

AT&T Needs All Parts of Time Warner to Justify Acquisition 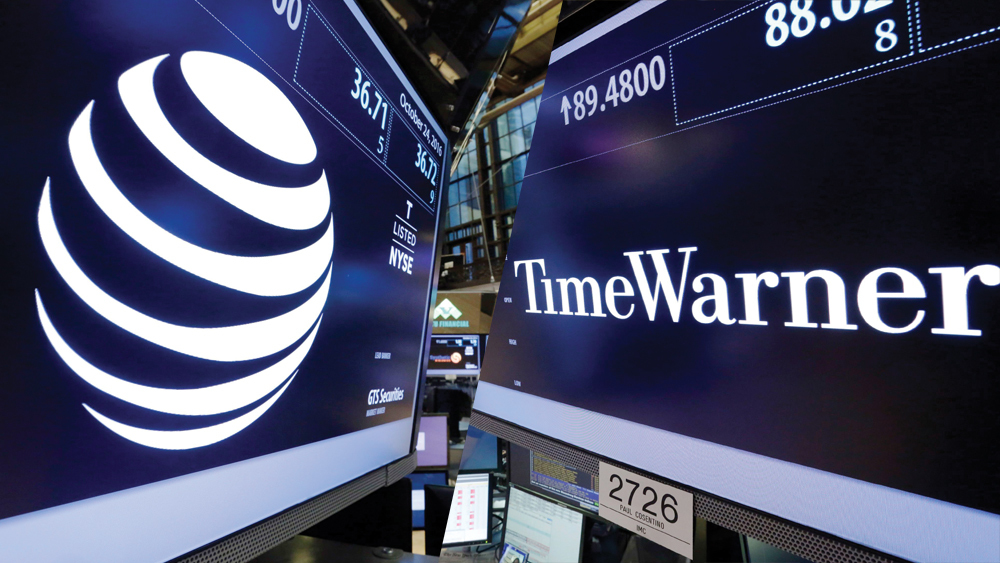 So, getting back to the case, the alleged violation cites Section 7 and 15 of the Clayton Act. Clayton Act is cited in virtually all DOJ anticompetitive complaint cases.

It was cited in US v. Dow Chemical Du Pont in June 2017. Specifically, DOJ complained that the merger would reduce or eliminate competition in the broadleaf herbicide market. This merger is particularly enlightening for our case, because the Dow merger was huge, just like the AT&T merger. It was one of those $100+ billion dollar deals. And the government felt uncomfortable.

What was the result? About 3 months after the initial case, DOJ has proposed a final judgment (which is like a draft final judgment) in which the merged entity would divest certain Crop Protection Assets. In other words, there was some negotiation between the regulators and the company that resulted in divesting certain assets. We know that Dow and Du Pont merged successfully.

DOJ and Time Warner once upon a time …

Clayton Act was also cited in the case against Time Warner Cable and Charter Communications in April of 2016. Sound like a deja vu? What was the case? DOJ asserted that emerging on-demand video providers needed the ability to obtain programming from content providers and the ability to reach customers over the internet in order to successfully compete with MVPDs like AT&T and Verizon. DOJ noted: “all of these MVPDs sell content to consumers primarily through large and costly video bundles that include hundreds of channels of programming that many customers neither desire nor watch.” (Emphasis mine.)

DOJ wanted to block the merger of Time Warner and Charter, because it felt that the larger, combined entity would be able to restrict access to programming for many SVODs. But, as many people know, SVODs are creating their own content, are able to hone in on their key focus market’s needs and wants, and can deliver the content with or without the larger telcos standing in their way.

What was the outcome of the Charter case? The final judgment was issued on September 6, 2016, about five months after the initial complaint. DOJ bound the entity to certain prohibited actions and required reporting to audit that they are in compliance with the rulings. In English, DOJ said ‘you can’t get favorable rates in negotiating with certain on-demand providers, and you have to submit reporting to us to prove it.’

Trump : AT&T-Time Warner merger ‘not good for the country’https://t.co/21wzYWbMXv pic.twitter.com/nyDpfjlHFv

The Justice Department filed a suit to block the AT&T-Time Warner merger.

First, I felt DOJ’s assertions stood on weak grounds. Specifically, DOJ assertions did not appear to appropriately highlight the substitution effects (rather than competition) between traditional cable and internet media.

Second, in two recent cases, one involving huge chemical companies, and another in the cable industry involving Time Warner, I found what seemed mere wrist-slap fines or minor divestitures that led to the deals closing.

In the end, I feel like a similar narrative may play out with the AT&T-Time Warner merger. There will be some counter-arguments. There will be behind the scenes negotiations with the regulators. The deal may close as is, or it may close with some minor concessions involving compliance rules or divestitures.

That said, I feel like on-demand internet content delivered to company-owned user base is a strong tidal force. I’m not sure if the merger will help AT&T in the long run.