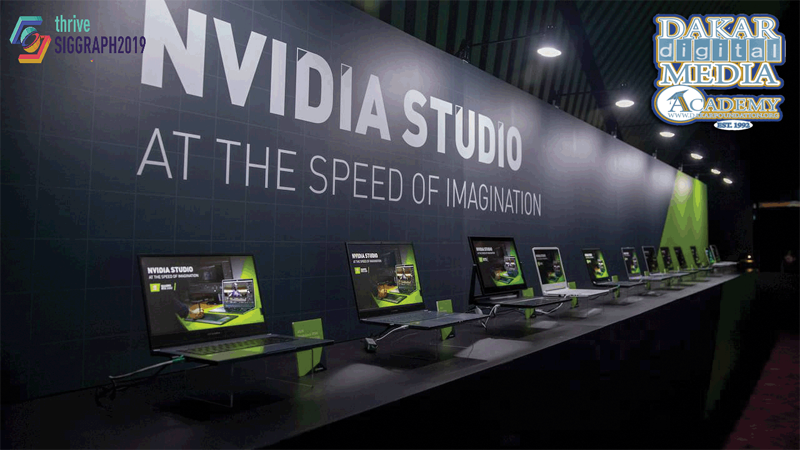 The Dakar Media Academy has just wrapped its capture of the  2019 SIGGRAPH at the LA Convention Center  delivered a host of new and emerging game-changers for the creative-tech industry, chief among them were;  real-time live and games programming during the conference, which shined a light on topics including but not limited to facial animation, AI, ethics, and the future of real-time production.

Some of the features highlighted at this years Siggraph were : Il Divino: Michelangelo’s Sistine Ceiling in VR debut at the show, powered by Unreal Engine.  Big thanks for Dakar Media  Acadeny members, Eric Elder, Taylor Acthinson, Shoni Doe, Gloria, Betty, Kay, and Erin.

One of the top features of the live events showcased 5G, and  how essential real-time technology is and continues to be in revolutionizing the way we interact in an increasingly connected society. Following a theme of thriving on live, the innovations that teams demonstrated  way to enhance future technological such as: applications for robotics, ray tracing, AI, XR, games, film, and 5G impact.

Today, at SIGGRAPH 2019, Imageworks artists present an in-depth look at the making of #SpiderVerse. Check it out in West Hall B, from 3:45p-5:15p!https://t.co/sAxNeEt6GZ pic.twitter.com/HgThSbbZuz

This years conference was more focused on conversation, Panels, the Computer Animation Festival, the Immersive Pavilion, and more. In collaboration with one another.  Siggraph 2017 was mind-bending, but this year I thought spotlighted creators, visionaries, and pioneers within the games industry from the world’s leading studios past and present and future. Content was presented through sessions and demos that spotlighted the latest rendering techniques, real-time tricks, asset pipelines, facial animation, advances in hardware and software, production challenges and accomplishments, virtual and augmented reality and 5G enabled capacity.

Noted SIGGRAPH 2019 Games Co-chair Christopher Evans, “At SIGGRAPH 2019, attendees can expect to immerse themselves in the most engaging new gaming technologies and techniques. In addition to being a key place to learn about the latest research in games, the speakers and experiences lined up this year shine a light on the ways the industry is thriving.”

Closed the doors for the last time at the #SIGGRAPH2019 VR Theater. We had 1620 audience members in 5 days over 31 screenings. I can’t wait to see how the theater grows next year. @siggraph pic.twitter.com/COPw6lbynw

Alongside a handful of Courses, Production Sessions, and Technical Papers, highlights for games and real-time production content include:

IMMERSIVE PAVILION
Il Divino: Michelangelo’s Sistine Ceiling in VR
Contributors: Christopher Evans, Epic Games
Experience Michelangelo’s Sistine Chapel ceiling in virtual reality. Move around the space or take a guided tour. Users can also suspend on a virtual scaffold to see the work up close as few have seen it before. The experience will use the all-new Valve INDEX headset.

TALKS
THRIVE – Foundational Principles & Technologies for the Metaverse
Speaker: Tim Sweeney, Epic Games
Science-fiction notions of “the metaverse” are slowly becoming a reality as products such as Fortnite, Minecraft, and Robloxbring immersive social experiences to hundreds of millions of people and blur the boundaries between games and social networks. This talk explores the foundational technologies, economies, and freedoms required to build this future medium as a force for good.

VentureBeat
Siggraph 2019 offers a sneak peek into what’s next for AR, VR, and CG
If you want to experience the future of computer graphics and immersive mixed reality, Siggraph is the place to be, and we have a preview of …
Animation World Network
Autodesk Releases Bifrost for Maya at SIGGRAPH 2019
SAN RAFAEL, CALIF – Today Autodesk has just announced Bifrost for Maya, available July 31 with Maya 2019.2. Bifrost makes it possible for …
AnandTech
NVIDIA @ SIGGRAPH 2019: NV to Enable 30-bit OpenGL Support on GeForce/Titan Cards
Kicking off this week is SIGGRAPH, the annual North American professional graphics gathering that sees everyone from researchers to …
RedShark News
NVIDIA shows off big speed increases at Siggraph 2019
At SIGGRAPH 2018, NVIDIA revealed its Turing GPU architecture with its new ray tracing extensions and also bringing Volta’s Tensor cores to …
Business Wire
Maxon Announces Next Generation Cinema 4D Release 21 at Siggraph 2019
Maxon today announces Cinema 4D Release 21 (R21), the next generation of its professional 3D modeling, animation, and rendering software …
Forbes
Siggraph 2019: Having Experienced Ray Tracing, I Am Now Convinced It Is The Future
Monday marked the start of Siggraph, the annual graphics conference, and I thought it was time to weigh in on ray tracing. I won’t personally be …
Phoronix
Intel Uses Its SIGGRAPH “CREATE” Event To Talk Up More Software Advancements
Intel’s “CREATE” event is ongoing right now at SIGGRAPH 2019 where they are using it to repeat their goal of seeing a “1,000x advancement in …
14 hours ago
SlashGear
NVIDIA brings 10 new RTX Studio laptops to SIGGRAPH 2019
Back at Computex 2019, NVIDIA announced the RTX Studio program. The basic premise was to team up with OEMs to release a series of …
StorageReview.com
NVIDIA Unveils New RTX Solutions at SIGGRAPH 2019
Last year at SIGGRAPH, NVIDIA announced its RTX technology, among other announcements. This year the company is announced that RTX …
1 day ago
PC Perspective
RTX Support for Blender Announced at SIGGRAPH 2019
The Blender Foundation has just announced RTX support for Blender at SIGGRAPH 2019. The patch was created by Patrick Mours of NVIDIA …