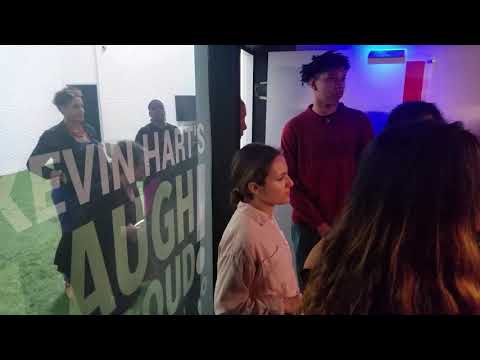 The open house at HartBeat Studios on April 26, 2019, was well attended with a lively group of participants with a variety of interests and backgrounds. The participants included the charter group of HartBeat Mentees comprised of students from Pierce, LA Mission, Santa Monica, and LA Valley College, Community College and Cal State University senior administrators, mentors, and others with industry experience. The event gave people an opportunity to meet, mix and exchange ideas for possible future collaboration/projects at the new HartBeat Stage 1.

Our crew of the two Kennedy’s, Carlos, Raquon, Madison and our leader Shoni handled their business today at the HartBeat Studios Open House for Education Leaders in K-20 in Los Angeles County https://t.co/EcLA8mO7zj

After an excellent lunch by Muddysmokedbbq a local AT&T vendor, there was a tour of the facility which highlighted the sound stages, the pre-made sets, the working radio station (which broadcasts Kevin Hart’s Laugh Out Loud Station for Sirius), work/collaborative spaces and changing rooms/prep areas.

Just wanted to send a note of thank you for including me in the event. Hat’s off to you for assembling an impressive community of folks committed to creating pathways for diverse, underutilized communities into Arts & Ent. Much potential for robust partnerships with the Colleges. pic.twitter.com/1kiDqU2XbI

Dakar’s student team comprised of Timberlyn, Shoni & Kennedy were embedded inside of the AT&T Codes Of Culture shoot @ HartBeat Studios. The experience was movie magic as we received tips, tactics and techniques to become production assistants from 10 categories of production pic.twitter.com/QgLawDvfNC

There was a second tour Hart Beat Studios Stage 2 which is currently being used for active film productions and commercials such as the new AT&T Codes Of Culture campaign . All in all it was a very good event. It exposed about 50 people to the new facility so that they can see the potential usefulness moving forward, and the launching pad to become a regional digital  hub for servicing all K-20 students in the creative-tech economy.