Dakar was hosted by Revolt Tv to a studio tour and discussion with senior executive James Brown about how to get our media academy prepared for development utilizing the new State Of California Career Readiness Campaign guidelines.

Victor Harwood, Digital Hollywood has made the following challenge “  I would like to propose one specific idea to coordinate with Dakar and My Brother’s Keeper. “

“The High School Record Company – a Joint proposed project of Compton Unified School District and the Music Industry.  This idea is simple – maybe someone has already tried it – but it seems like a perfect and obvious fit.”

As an example of project based learning, Victor followed with,  ”We want to bring the expertise of Music Industry executives and artists as a mentoring-support system to high school students in setting up an actual “Record Company” with Artist Development, Recording Studio, Marketing and Promotion and Performance of Music.”

Dakar is in discussion with Revolt, Digital Hollywood, and USC CTM to create an advisory board to pull a default curriculum that will adapt and scale for the Compton Unified School District (CUSD) for fall 2015.  The mentorship component will provide an overlay to enrich the curriculum with career professionals who will volunteer their time, underwritten by their corporations good will.

Below is our Vision Statement For launch in 2015

Mentorship will be the lynchpin to tie together the potential resources necessary to carry our plan to term.  Dakar is being supported with a technical assistance grant  from a  National Mentor Program to get proficient in delivering an end-to-end program for mentoring an academy, not just it’s constituents.

Dakar  board member, Terrence Coles was at Revolt Studio, and remarked “Revolt TV is redefining the media business for professionals of color.

“Revolt is pushing the boundaries for state of the art content production and distribution.They have also provided unfettered access to all levels of management and career opportunities for our students. “

Ryan Whetstone, Director of Career Tech, CUSD was on hand for Revolt tour and has Dakar focused on new State Of California framework for matching our curriculum with Arts, Media, and Entertainment career pathways.

Also on hand was instructor, Larry Hood who remarked, “Great studio tour and looking forward to working with you to bring quality content. I have students who have been working on projects for the past 7 years. I would like to do a showcase one day with some of my talented kids and film it or submit it to Revolt to create more opportunities if internships are not feasible. We have students who are songwriters producers and performers as well. All facets of entertainment.”

CUSD has been aggressively looking for corporate partners to bolster their career tech initiatives.  Their first studio tour took place, October 22nd at the Hollywood Riviera Studio in Torrance, Ca.

CUSD school board President-Micah Ali,  Executive Director of Curriculum and Instruction - DeWayne Davis, Dakar board member-Terrence Coles, and Ryan Whetstone were invited to see the facilities and discuss Hollywood Riviera’s curriculum that has a 90 percent career placement for their graduates.

Dakar thanks all of the people involved in pulling together our tour, James Brown, Angela, Turner, Alexandra Bunch, Lauren  Walker, Katie Lobianco, and Kristin Walker.

This was the fourth occasion in which Dakar had the pleasure of Revolt’s support.  Last month Revolt participated in our Digital Hollywood Panel, and on September 26th,  Angela Turner  and Stacci Smith came to Compton’s Channel 26 for a  national live  broadcast  produced by the Dakar Media Academy’s student crew.   Our first Revolt event was the Trey Songz Takeover, which we posted months ago. 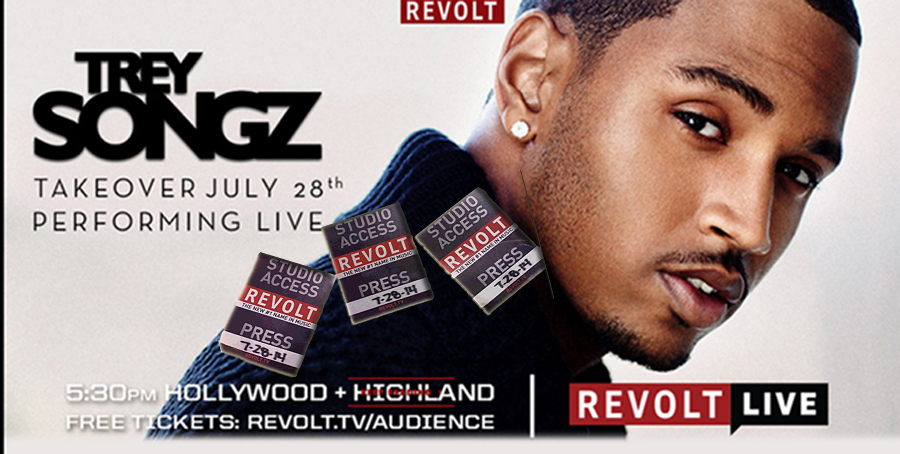 Dakar Foundations Makers Academy was invited with press credentials to a special outdoor Revolt TV Live capture of the Trey Songz TakeOver and Q & A.  Dakar blogged and steamed from the Hollywood and Highland venue, and yes the show was crackin!   Below are a few clips from our livesteam channel.

First and foremost we want to thank sr. vp of content distribution, James Brown with providing access, and second we thank Trey Songz for keeping the energy and authenticity high.  There will be more commentary to come about Revolt TV and its collision course with being an MCN.  Until then, Stay tuned and stay connected to Homageusa.

Our mission was to  cover the more than hundred Revolt TV crew members needed to pull of this production.  We were given access to look over the crew member shoulders as they performed their tasks as a cohesive unit.

The staff and crew were helpful, by given us power to charge our smartphones,  taken by staff member back stage to get a stage managers point-of-view, and  escorted by security to get our best shots.

The original, one-hour show features special guests, artists, and live performances converging at Revolt’s studio in Hollywood.  The show discusses the “hot” stories of the day, along with breaking news and new music releases.

The Audience was energetic throughout, and many had been in line since 11am in the morning waiting to get  a spot inside of the complex as Hollywood and Highland.

Although the performance  was taped live, corespondents were on the scene to provide live cut-ins for social network audiences viewing as far away as Australia, and as near as Los Angeles.

During Trey Songz’s interview we’re struck by his answer about one of his most memorable performances.  He remarked that South Africa was  one of the places that held a special place., ” stating that to be so far away from home yet, feeling at home with the love they showed.

One of Dakar Makers Academy goals is to get our students to mimic professional operations of the crew we witnessed Monday, July 28th. We’ll keep our students primed and in the laboratory for the next opportunity to learn more about Revolt TV’s theories and business and practices .

Below is a slide show comprised of the photographs of our interns camera.  We hope you enjoyed our capture, we surely enjoyed being there and feel confident the Revolt TV is going to be a big deal on cable and online.